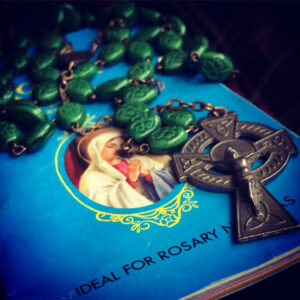 One of the first devotional activities that I learned during early explorations into Catholicism was to pray the Holy Rosary.

I had grown up in an Evangelical Protestant home, but stopped attending as an adult, and had observed no religion for a decade or more. I was drawn to a notice in our local newspaper about a session for anyone interested in learning about the Roman Catholic Faith, and decided to attend. I soon found myself there each week as an Inquirer to the Rite of Christian Initiation for Adults.

The RCIA sessions focused mostly on the “Big T’ Traditions of the Church, but we also learned about the vast and beautiful trove of Catholic culture and customs. The Rosary has been one of the most beloved and widespread Catholic prayer practices for centuries, so naturally it received some attention.

I obtained a Rosary and an instruction book, and began to learn how to use them. When I casually mentioned this to our Director of Religious Education, Sister Ancilla (a Springfield Dominican), her face grew serious, and it almost seemed as if she was in another world for a moment as she said “The Rosary is a very powerful prayer.”

A Brief History of the Holy Rosary

The use of beads or knotted ropes to count repetitions of mantras or prayers goes back thousands of years across many cultures. In Christianity, the Desert Fathers are known to have been using prayer ropes in the 3rd Century of the Common Era, praying the Jesus Prayer – “Lord Jesus Christ, Son of God, have mercy on me, a sinner.”

It is thought that the use of 150 knot prayer ropes by the laity was practiced in imitation of Monks and Clergy, who prayed the 150 Psalms each day. Since most laymen were not literate enough to read the Psalms, they pronounced the Lord’s Prayer on each knot as a substitute.

Then, in 431 C.E. at the First Council of Ephesus, Mary was declared “Theotokos” – the Bearer of God. This declaration by the ecumenical council set in motion the more widespread adoption of Marian prayer.

The Latin word “Rosarium” means a crown or garland of roses. Dominican tradition says that the Blessed Virgin Mary appeared to St. Dominic in 1208, giving him the form of the prayer. The Dominicans continued to teach and practice the devotion, and its use spread throughout Christendom. Pope Pius V (a Dominican) established the Rosary as an “official” devotion of the Catholic Church in 1569.

And so Dominic looked to that simple way of praying and beseeching God, accessible to all and wholly pious, which is called the Rosary, or Psalter of the Blessed Virgin Mary, in which the same most Blessed Virgin is venerated by the angelic greeting repeated one hundred and fifty times, that is, according to the number of the Davidic Psalter, and by the Lord’s Prayer with each decade. Interposed with these prayers are certain meditations showing forth the entire life of Our Lord Jesus Christ, thus completing the method of prayer devised by the Fathers of the Holy Roman Church.

The “angelic greeting” is that of the Angel Gabriel in Luke’s Gospel “Hail, full of grace, the Lord is with thee: blessed art thou among women.”

In 1917, three shepherd children in Fátima, Portugal reported that they had seen apparitions of “a Lady more brilliant than the Sun.” She asked the children to pray the Rosary every day to bring an end to World War I and to bring peace to the world. Recitation of the “Fátima Prayer” at the end of each decade of the Rosary became a widespread practice thereafter.

In 2002, Pope John Paul II issue the Apostolic Letter Rosarium Virginis Mariae, declaring October 2002 to October 2003 the “Year of the Rosary” and giving us five new Luminous Mysteries to contemplate during the prayer.

The Rosary and the Prayers

To pray the Rosary, we begin in the Name of the Father and of the Son and of the Holy Spirit, with the crucifix in hand, making the Sign of the Cross. We then recite the Apostle’s Creed.

I believe in God, the Father almighty creator of heaven and earth and in Jesus Christ, His only Son, our Lord, who was conceived by the Holy Spirit, born of the Virgin Mary, suffered under Pontius Pilate, was crucified, died, and was buried. He descended into hell. On the third day he rose again from the dead. He ascended into heaven and is seated at the right hand of God, the Father almighty. He will come again in glory to judge the living and the dead. I believe in the Holy Spirit, the Holy Catholic Church, the communion of saints, the forgiveness of sins, the resurrection of the body, and the life everlasting. Amen.

Then, on the first bead, we recite the Lord’s Prayer (which Catholics usually call the Our Father prayer).

Our Father, who art in heaven hallowed be thy name; thy kingdom come; thy will be done on earth as it is in heaven. Give us this day our daily bread and forgive us our trespasses as we forgive those who trespass against us; and lead us not into temptation, but deliver us from evil. Amen.

As we grasp each of the next three beads on the way to the centerpiece, we recite the Angelic Greeting (Hail Mary prayer).

Hail Mary, full of grace. The Lord is with thee. Blessed art thou amongst women, And blessed is the fruit of thy womb, Jesus. Holy Mary, Mother of God, Pray for us sinners, Now and at the hour of our death. Amen.

Then the Doxology prayer (Glory Be).

Glory be to the Father, and to the Son, and to the Holy Spirit. As it was in the beginning, is now, and ever shall be, world without end. Amen.

On the last bead before the centerpiece, we begin the first decade of the Rosary. We would proclaim the first mystery to be contemplated, and perhaps read a short reflection about the mystery, and then pray the Our Father. Then, on the next ten beads, we pray the Hail Mary as we continue to contemplate the mystery. We end each decade with the Glory Be and the Fátima Prayer.

O my Jesus, forgive us of our sins. Save us from the fires of hell. Lead all souls into heaven, especially those in most need of thy mercy. Amen.

We continue on in this fashion through each set of one plus ten beads, until we have reached the centerpiece once again after the fifth decade of the prayers. We then pray the Salve Regina (Hail Holy Queen).

Hail Holy Queen, Mother of Mercy, our Life, our Sweetness, and our hope. To thee we cry, poor banished children of Eve. To thee we send up our sighs, mourning and weeping in this vale of tears. Turn then most gracious advocate, Thine eyes of mercy toward us, and after this, our exile, show unto us, the blessed fruit of thy womb, Jesus. O clement, O loving, O sweet Virgin Mary. Pray for us O Holy Mother of God, That we may be made worthy of the promises of Christ. Amen.

We conclude with this final prayer.

Let us pray. O God, whose only begotten Son, by His life, death, and resurrection, has purchased for us the rewards of eternal life, grant, we beseech Thee, that meditating upon these mysteries of the Most Holy Rosary of the Blessed Virgin Mary, we may imitate what they contain and obtain what they promise, through the same Christ Our Lord. Amen.

The Mysteries of the Rosary

The Mysteries of the Rosary call to mind the most significant events of the Gospel. The are grouped into sets of five.

My Own Experience With The Rosary

I have found that Sr. Ancilla was right. The Rosary is, indeed, a “very powerful prayer.” For me, it is very much like devotional chanting, in that it seems to foster trust and surrender. It is when I let go of my need for control that I make way for marvelous things to happen in my life.

I have no data on this, but I also believe that the practice leads to a brainwave state which nurtures a sense of grounding and serenity. I can attest that I certainly feel more grounded and serene when I pray the Rosary daily.

Over many centuries, this practice has created something of an égrégore, to which our own intentions are joined when we pick up the beads. The Rosary connects me to generation after generation of others who have kept a devotion to the Holy Mother, and to her nurturing spirit of peace and compassion. There is power and beauty in that.

There is also power and beauty in creating a personal ritual or set of habits in relation to devotional practices such as this. I sometimes will light a cone or stick of rose incense and a Marian votive candle before beginning the prayers of the Rosary, and I still like to use the same Celtic Cross beads set that I first began praying with nearly thirty years ago. This helps to promote a sense of continuity with the grounding and serenity noted above.

Although the structure of the devotion described above may seem a little overwhelming at first, there are lots of resources available nowadays to make it simple to begin. There’s no need to memorize the prayers, or even to have a set of beads in your hands (although they are widely available and relatively inexpensive). Here are  some links that may be helpful if you have an interest.

Rosary Army – Dear friends Greg and Jennifer Willits began making and giving away all-twine knotted Rosaries two decades ago, and they are still doing it today. You can request yours, for free, on their website. They also have an app that will lead you through the prayers of the Rosary.

Rosary Center and Confraternity – This site offers instructions on how to pray the Rosary, along with articles, videos, an online store and more.

How to Pray the Rosary – From the USCCB.

The Mysteries of the Rosary – From the Vatican Website