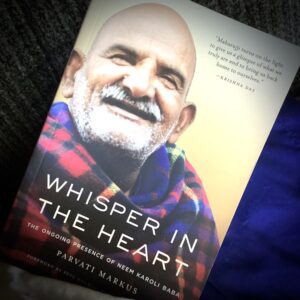 Neem Karoli Baba is a great Saint of India who left the body in 1973. This marvelous new book by Parvati Marcus brings us stories of people whose lives were changed by “Maharaji” though they did not meet him prior to his mahasamadhi.

I was first introduced to Maharaji through stories told by Krishna Das, and then became further fascinated while studying Ram Dass’ books. The fantastical tales and heart bending stories of grace, deliverance and downright miracles surrounding him have been a source of guidance and inspiration. He was not only a great Saint, but his influence on an entire generation of American spiritual thinkers and teachers is inestimable.

As I was reading this book, from time to time I related a story or two to my young adult daughter. One afternoon she asked if I had ever met Maharaji. She knew well that he left the body nearly fifty years ago, but it seemed a natural and reasonable question.

I have not had the sort of dramatic encounter that is described in the pages of the book. I’ve not had a vivid dream, or glimpsed him in a public space only to find out that he had met some urgent need and then disappeared. I’ve not had my heart crack wide open, with the sudden assurance that Baba is my guru. Not yet, anyway.

I do believe that he has changed my life in some fundamental ways, though. It was through his devotees that I learned to “Repeat the Name of God, and everything else is accomplished.”