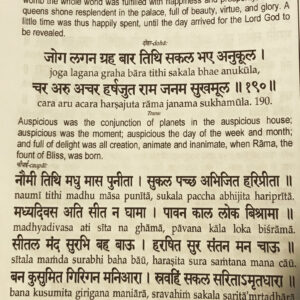 Goswami Tulsidas was an Indian saint and poet who lived in the 16th Century CE. His Ramcharitmanas (the Holy-Lake of the enactments of Lord God Rama) is a retelling of the Ramayana in Awadhi. Through this, which would become one of the great works of world literature, he brought the story from Sanskrit into the vernacular of the people for the very first time.

I had previously read William Buck’s excellent translation of the Valmiki Ramayan (which predated Tulsidas by many centuries), but since Tulsidas is the author of one of my favorite prayers, the Hanuman Chalisa, I had long wanted to explore his Ramayan as well.

I found a very nice hardbound version, with transliteration and translation by Baldev Prasad Saxena, nearly two years ago, and began to read it at that time, but made little progress before shelving it for another day, overwhelmed. When I came back to it this January, I was determined to work my way through, slowly but surely, committing to reading ten pages each day – no more and no less. I completed it on February 26th.

What I liked most about this book was the ready availability of the original text and transliteration above the English. I also loved the way the story was presented, as a series of conversations (between Lord Shiva and Parvati, Bharadwaj and Yajnavalkya, and Kakbhushundi and Garuda) where one person is relating the tale to another. The invocations which commence each canto are also lovely.

Tulsidas was a devotee of Hanuman, and founded the Sankat Mochan Hanuman Temple on the spot where he is purported to have received darshan from the great monkey hero. That spirit of devotion shines through in every passage of this book.

I’m thankful to have had the opportunity to read this great work, and would recommend it to any serious anglophone student or devotee. I would also recommend the William Buck Ramayana translation as perhaps a bit more accessible (and no less beautiful).