“Repeat the Name of God, and everything else is accomplished.” 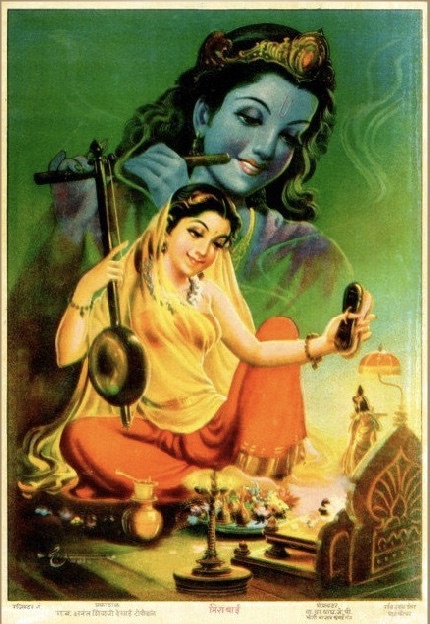 Many of us get our first brush with this practice at a local yoga studio. One of my wife’s teachers used to bring a harmonium to class from time to time, and they would sing together after asana practice. I first experienced the practice myself in a Kundalini Yoga class that we attended together.

The Bhakti Movement came to the fore in Medieval India. The practice of personal devotion to Hindu deities is much older, dating back to the First Century BCE. By the 5th Century CE, notable bhakti poets emerged in Southern India, and the movement spread widely and rapidly throughout the Indian Subcontinent during the 12th to 18th Centuries. Some historians believe that its growth among Hindus was at least party in response to the arrival of Islam.

Bhakti as we know it today, at least in the West, tends to take the form of singing the names of Hindu deities (or sometimes other Hindu or Buddhist mantras), often accompanied by instruments such as harmonium, guitar, dotara, tablas, mridanga drums and kartals. It is quite often practiced in the call and response style from Indian folk music traditions known as kirtan.

I have come to think of this practice as a way to honor the light and life within each of us, and to draw our lives closer to that light. One need not be Hindu, nor hold any religious beliefs or convictions at all to appreciate, to enjoy and to benefit from this practice.

Bhakti as a Meditation Practice

One can think of bhakti as being simply a mantra meditation practice, with a melody. Just as we do in any mantra meditation we repeat certain words, phrases or sounds, and when our mind wanders off, we gently draw it back to the mantra we are repeating. This practice helps to still the mind, and helps us learn to keep our attention in the present moment.

Krishna Das uses the analogy of “a spoonful of sugar to help the medicine go down.” The medicine is in the mantra. The music is just there for the sweetening.

Singing to Evoke the Loving Presence Within Us

When we sing, and particularly when we sing together, we manage to get in touch with that part of ourselves which is most authentic.

Here is what the legendary American Folk Singer, Pete Seeger, wrote in his introduction to a songbook titled Rise Up Singing.

Once upon a time, wasn’t singing a part of everyday life as much as talking, physical exercise, and religion? Our distant ancestors, wherever they were in this world, sang while pounding grain, paddling canoes, or walking long journeys. Can we begin to make our lives once more all of a piece? Finding the right songs and singing them over and over is a way to start. And when one person taps out a beat, while another leads into the melody, or when three people discover a harmony they never knew existed, or a crowd joins in on a chorus as though to raise the ceiling a few feet higher, then they also know there is hope for the world.

I cannot explain this in a rational, analytical way, but there is something about these Indian devotional chants that stirs one’s heart. It is, perhaps, exceedingly odd to be a grey-headed white Christian American, singing in fumbling Sanskrit about an ancient monkey god. But when I do, I get the sense that it is one of “the right songs” that Seeger mentioned.

We sing bhakti to stir the loving presence deep within us, a presence which is secure, perfect and eternal. There are many names for it, but there is only the one presence – the one Source – that which is life and love.

Entering the Age of Truth

The Hindus have a name for the time in which we currently live. It is called the Kali Yuga. One of the four great epochs of the world’s time cycle, the Kaliyug is the age of confusion, or downfall. It is a time of great darkness, materialism and conflict. Not fun to be living in such an era.

The good news is that the Hindus also believe that during the time that we engage in spiritual practice, particularly devotional chanting, and especially when we gather together with others for bhakti, we enter into the Satya Yuga – the age of truth, and light, and beauty, and kindness and justice. As we enter into the age of light, that light enters into us, and radiates out from us to everyone and everything around us. We bring light, life and happiness to our own hearts, to our community and to our world.

Of course, it is hard to find data on this. How does one measure the truth in a person’s heart? How does one verify a person’s location in one of these four ages described in ancient Indian lore? Do these ages even exist?

What we do know is that negative states of mind, things like tension and anger and fear and doubt and worry, all have a negative effect on human physiology, neurology, psychological health and societal health. And we also know from anecdotal accounts and bonafide studies that practices such as bhakti, over time, can help to promote positive states of mind (and improved physical well being, too – music is now used to help treat chronic pain, to help speed the recovery of stroke victims and more).

Since bhakti is also an immensely pleasurable activity, I’ll take the chance that it doesn’t transport me to the Satyug. But I prefer to think that it does. 🙂

But how can a Christian sing to a “foreign god?”

I won’t argue with someone who believes that God is the ogre of the universe, waiting to stomp on the first person who appears to be having fun. I also won’t go into any detail in this post about the historical context of the Ten Commandments, or Church teaching on this topic. I do have thoughts on these matters, and perhaps will write more on the subject later.

For now, I will simply say that I have come to believe that these distinctions we draw between the Catholic Jesus and the Baptist Jesus, and Allah, and Jehovah, and Shiva – we are thinking too small. These are not different gods, they are different ideas about the One God.

In any case, I am at peace with it.

As noted earlier, one need not buy into any specific ideas about God or religion (or any ideas at all) to enjoy kirtan and benefit from its practice. Here is how one of my favorite bhaktas, Devadas, puts it on his Brooklyn Mellows website.

While these mantras are associated with the sacred forms, names, mythologies and great teachers of traditional Hindu culture, it is not necessary to be religious or even spiritual to enjoy kirtan or for it to be a transformative practice. While the practice of kirtan may awaken a spiritual mood or feeling within us, we aren’t asked to believe in anything. We don’t need to convert to any particular religion or sect. There is no dogma to follow. We aren’t asked to be anything other than who and what we already are. We can try the practice and if we enjoy it, great. We can come back to it and even integrate it into our lives. And if we try it and we don’t enjoy it, that’s also great. We can move along to something else that might be better for us.

Want to get started?

If you’re interested in learning more about this sweet, sweet devotional practice, there are two incredible online video resources that I would suggest.

Every morning, at 9 AM Eastern, Devadas has been livestreaming kirtan from his apartment in Brooklyn. He began doing this during the early days of the pandemic quarantine, and at the time of this writing is approaching six months without having missed a day. Watching his streams, and chanting along, have become a fundamental part of my own daily spiritual routine, and I have learned so much from him about the chants and the practice. It’s a beautiful gift to the world.

Also, once a week, on Thursday Evenings at 7 PM Eastern, Krishna Das livestreams kirtan and Q&A on his YouTube Channel. These sessions, too, are a great gift. His stories about his guru and his time spent in India are fascinating, and his perspective and sense of humor add quite a lot of that “spoonful of sugar” mentioned above.

There is Bhakti, Right Here in Key City

With a capital B and that rhymes with Key. 🙂 Sorry. I couldn’t resist.

We also have an entire website devoted to our own local kirtan gatherings. There’s not a lot of content on the site yet, but you may find something of interest there, along with links to other sites, resources, and chant lyrics. Visit KeyCityKirtan.com if you’d like. And if you live near the great Chicago Southland, come join us some time.

Do you sing bhakti? Share your favorite stories, insights and resources. Have questions? Email or comment. I’d love to hear from you!