When I was younger, one of the first mantras I ever learned was “Om Mani Padme Hum.” I knew that the literal translation was something along the lines of “I bow to the jewel in the lotus blossom.” I also knew that the mantra was especially sacred to Tibetan Buddhists. Other than that, I was entirely ignorant, but I liked the sound and I liked the idea of doing something that was unusual and exotic, so I got a mala made of Bodhi seeds, and I would sometimes chant with it. I had the Tibetan characters for the mantra tattooed on my upper arm. At that time, the practice of daily chanting and devotion did not become a habit, but as you’ll see if you read on, apparently somehow the Dharma had been planted in my heart and mind.

In 2001, Claudia and I travelled to the Twin Cities for darshan from His Holiness the 14th Dalai Lama. I’m not sure what first sparked our interest in the trip, but it was a profound experience to be in the presence of the living Buddha.

Profound as it was, when we returned home, I resumed my “normal” activities as a greying American white guy, attending Mass on weekends, doing my best to lead a more or less respectable life, yet drinking every evening and not paying much attention to spiritual development or anything approaching a path toward awakening.

When I finally began to wake up in 2019, my mala was there, the mantra was there, and I began to use them in what eventually became a daily meditation practice. I was still relatively ignorant about the deeper meaning of the mantra and practice, but I knew that it was good for me, and trusted that it would bring me to understanding of some sort if I just kept practicing.

In May of 2020, I watched a benefit concert for Saving Wild Tigers that featured dozens of Bhakti artists, including Deva Premal and Miten. I became spellbound as they sang the Green Tara Mantra, Oṃ Tāre Tuttāre Ture Svāhā.

Over the next few weeks, casually at first, I began to research and study.

At last I ran across the story of the Compassionate Bodhisattva, Avalokiteshvara (who is believed to be incarnate in this world now in the person of Tenzin Gyatso, the 14th Dalai Lama). The Bodhisattva was near to enlightenment, ready to escape Saṃsāra – the cycle of births and deaths – and step through the threshold to freedom. At that moment, out of deep compassion, he chose to remain in the world to help and guide and light the way until all beings are free from suffering and delusion.

It is said that a single tear from the eye of the Avalokiteshvara created a pond, and in that pond a lotus sprang up, and from its blossom arose Tara, the Mother of all Buddhas.

“I bow to the Jewel in the lotus blossom.” As if in the flash of a thunderbolt, the mantra’s true meaning became clear, tears rolled down, and I felt a connection of the deepest sort.

On July 8, 2020, I pulled The Star in my daily card draw, and wrote these words in my journal.

It is said that one does not find their guru. The guru finds them. I believe that she has, at long last, found me, and gathered me into the fold.

I take the devotional name Shyamatara Das – Servant of the Holy Mother.

Guiding Star, nurture us and lead us to freedom. 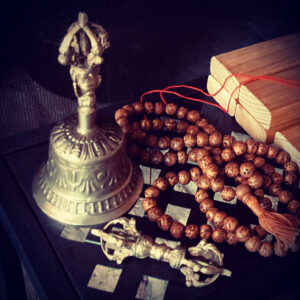 Recently I completed a course of study on Green Tara Vajrayana Sadhana from Tara Mandala Center, and have begun a daily practice. Although my pronunciation is still developing, and I have not yet begun to incorporate the mudras, I suspect that it will eventually become my most essential daily personal devotional practice.

If you’d like to learn more about Tara, there is an excellent article at the World History Encyclopedia written by Joshua Mark. You can also read about the 21 Taras at the Tara Mandala site.

It is worth noting that in Tibetan Buddhism, “deity” means something a bit different than what we take it to mean in the West. Tara is the personification of qualities that we should all desire to emulate, and is, in fact, already not separate from us. In Vajrayana Practice, we seek to experience and recognize more fully that unity which already exists, and to grow in the habits of compassion and service as a result.

This seems to me to be a worthwhile thing to do.